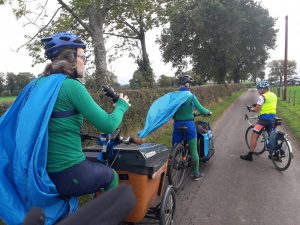 Wonderful, starting the day with someone else determining the route and guiding us. Phil from Friends of the Earth in Manchester had taken on that task and had already cycled to Manchester before that, slightly more than where we had our overnight stay. It was a distance of just over 70 km. We agreed to be there at 10 am and a glance at Google maps minutes us yesterday that it was only 15-15.
But no day goes the way it should…. 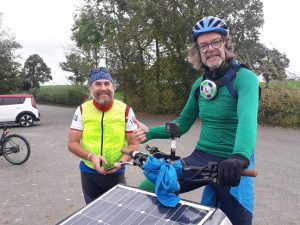 From resetting the route to the meeting point it turned out that yesterday our Google maps was set to ‘car’ for the last km, so we concluded that it was only 15 minutes to the meeting point. When calculating with cycling, it turned out that it was no less than 40 minutes! So there was no chance we were going to make it at 10 o’clock….
Cycled hard and reduced the duration from 40  to 30 minutes. We were finally able to meet Phil at 10:30 am and shoot straight away so as not to lose too much time.
The cycling was very relaxed and I could finally shift my attention more to the beautiful nature and Ilonka.

Also had some time to make some videos with the GoPro.
The first track swent smoothly and the first stop we made at a nice lake with many white geese. David saw them as an audience to performe one of his songs again. 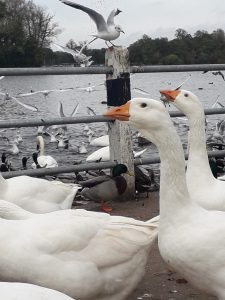 Our second part of cycling went just as smoothly as the first and the area in which we cycled was pretty much similar to our ‘Limburgse Heuvelland’ (Limburg Hills, the Netherlands). Phil agreed as he had been there before. 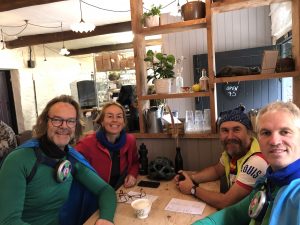 Everything went smoothly. After checking the estimated duration of the last part of the route to Manchester drive (we would reach within 1.5 hour) I suggested to ride another 45 min and then find a pub to have a nice drink to end the succesful day in style.

Phil agreed and he knew a nice pub just within the boundaries of Manchester. Large authentic business (the owner described it more as ‘old junk’, it would be completely modernized soon…), music and video clips from the 80’s on TV screens, great (UB40, Style Counsil, Allison Moyet, Strawberry Switchblade , Julian Lennon and………… of course Duran Duran)!
When Ilonka went outside to get the water bottle (to fill it with water) she determined that Phil’s bicycle was not there and rushed back inside. When Phil went to have a look, he eventually found his  lock on the ground, cut open, and the bike was a disappeared! 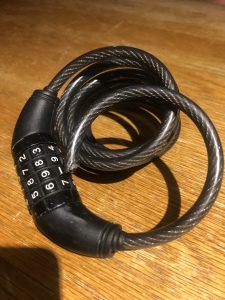 Would it really be not possible for it all to run smoothly for one day?

Phil decided to call the police to file a report but encouraged us to ride and navigate the last bit ourselves without him. He would survive….he said. Where did we hear that earlier this week? Such a hero again!

Finally reached our destination around 5 pm but before we were well inside (at a kind of rectory, next to a very sustainable church building, with solar panels on the roof) it was 20 minutes later and we were expected to go to the location of David’s performance at 6 pm. Little time to freshen up or prepare.
In the meantime it had also started to rain (which was predicted by the way). The drive to the location also turned out to be much further than we expected.
When we got there we were welcomed very warmly! 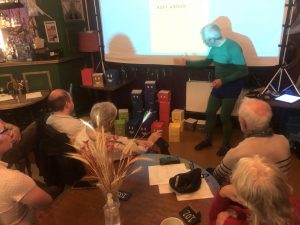 David’s performance ran very smoothly and there was a good response from the audience. 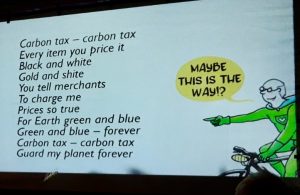 Then, it was now 9 pm, we were treated to a spicy evening meal.
Also drove back in the rain. Clothes and all well hung out to have dry clothes early tomorrow. A challenging distance is waiting for us: 127.5 km! Phil, our guide who’s bike got stolen, told us that due to expected heavy rainfall, even trains could be canceled. Moreover, he would not be able to escort us (for lack of bicycle) to      Kendal.
So that will be quite a challenge tomorrow.