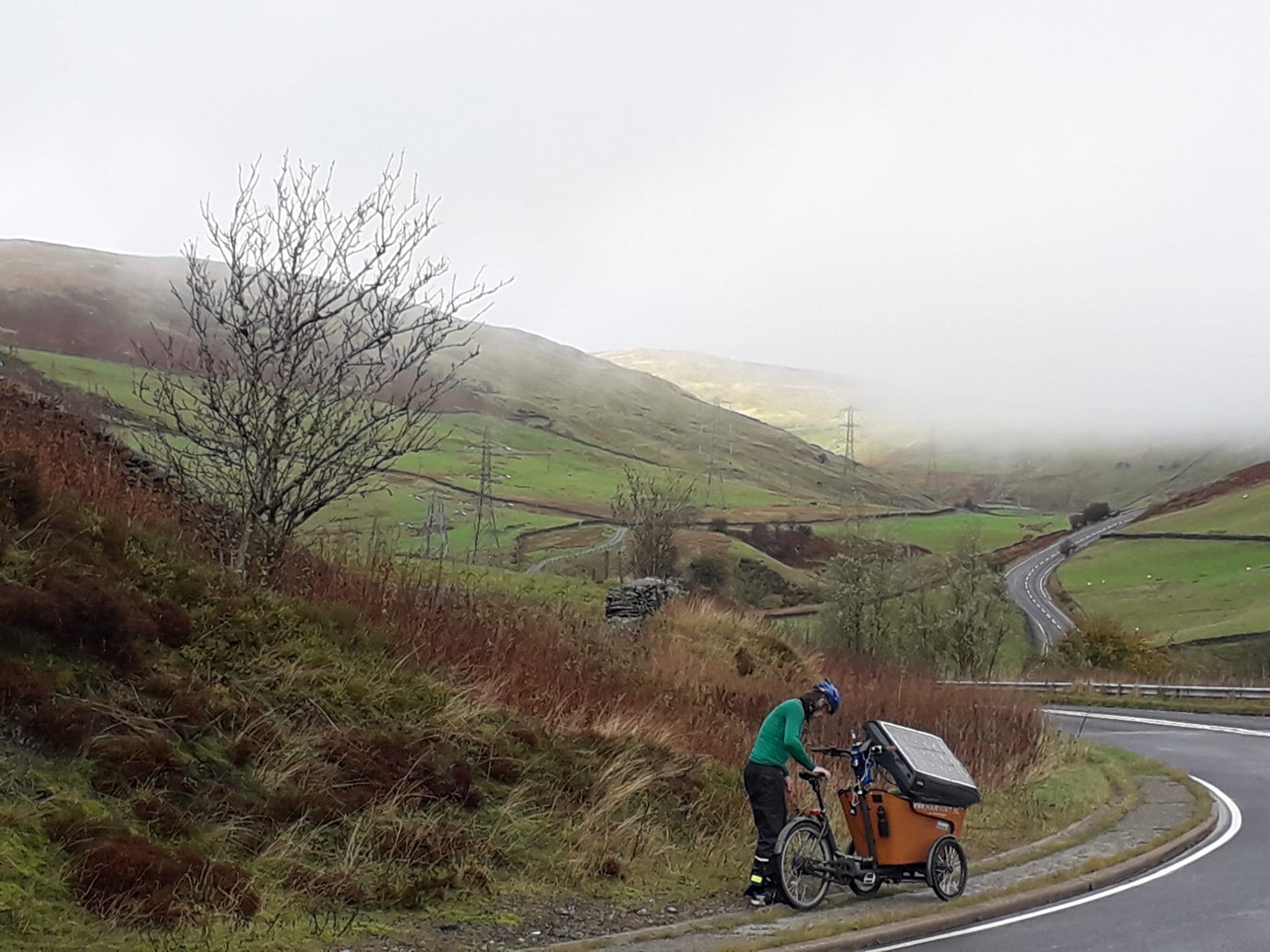 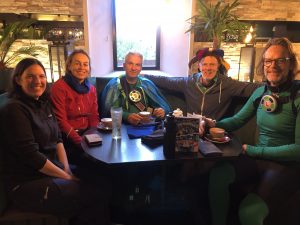 Today a ‘monster of a distance’, 130km (81 miles), for the most part accompanied by two people from friends of the Earth Manchester (Cat and Vincent). Great to have them with us and be able to have a laugh once-in-a-while. 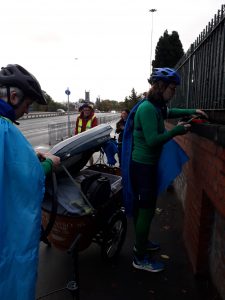 ‘Monster of a setbacks’, even that… (three times flat tire in 1 day ). 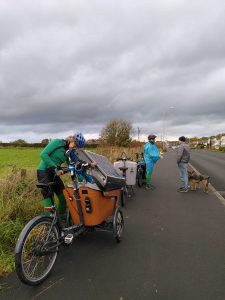 iPhone that no longer wants to make contact with the charging cable and thus became problematic with navigation. 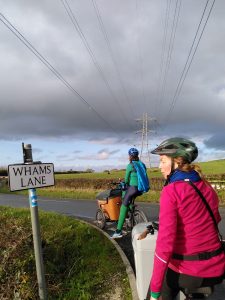 Eventually just got back to where we had planned, at half past eight in the evening. 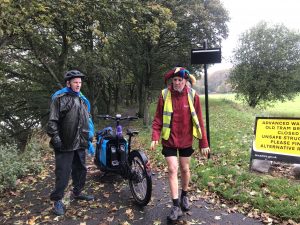 You’ll have to excuse us, most of the pictures come from the iPhone and it’s now ‘dead’. Maybe we can still get the phone to work, but for now only the pictures from Ilonka’s phone. 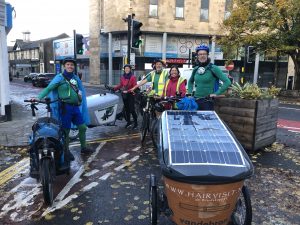 Now also a bit too tired to report further…. 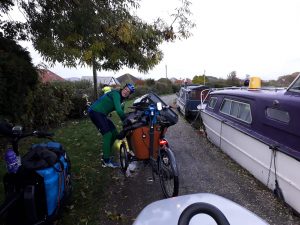 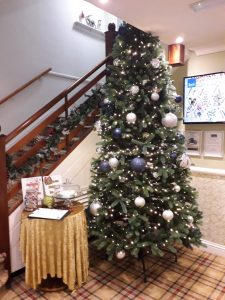 A Christmas tree? Yes! A Christmas tree. The hostel we were in belonged to a chain and they thought it would be a great idea to offer packages in a Christmas atmosphere from October to December. 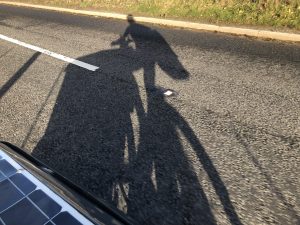 Strange? Ah, what’s strange? Perhaps the fact that someone dressed in a blue and green superhero outfit (with cape) offers to sing a song… 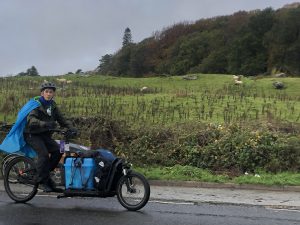 Actually, that is also a kind of one-on-one performance. And we don’t think that’s strange, we think that’s special…! We had two predictions today: one about the weather and the other about the length of the trip. Negative and positive respectively. 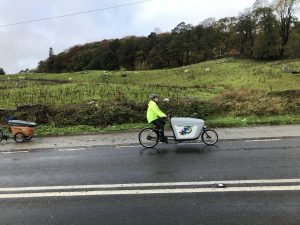 Where we noticed in recent days that the distances were always disappointing, today’s distance had to be doable: about 45 kilometers (28 miles). Quite a few mountains in the first part, but that can also be beautiful. 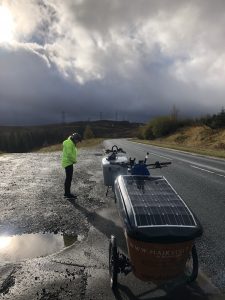 However, the weather was the lesser factor; it was already raining in the morning and didn’t stop until we started riding. Then put on your rain suit right away! To be honest, this was the weather we had actually anticipated from “day one”. Then it can always work out for the better. And so it did for the first week. Also, that drizzly weather with low-hanging fog clouds, grayness and hills is the image that came to mind when I said yes to this trip. 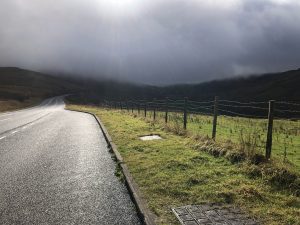 Just fits in. And then when we look back on today, it turned out to be just that; beautiful surroundings, mountains, waterfalls, sheep and goats in endless fields, surrounded by stacked stone walls and yes, quite a bit of rain. 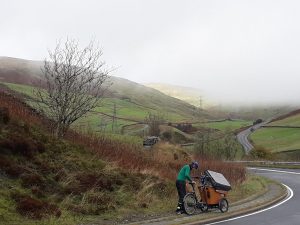 At some point a very recognizable camper came from the opposite direction; an aging Hymer (you know, with that fishbowl-like windshield). Really, I thought for a moment that Wies and Jef (my mother and father) had taken the plunge to see us on this trip. 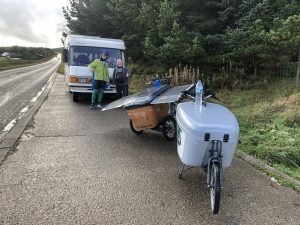 In the end it turned out to be enthusiastic Englishmen (and it was a Hymer based on a FIAT instead of a Mercedes). They even turned around and rode with us for a bit and I then pointed to a safe parking lot to chat for a bit. Nice people who were very interested in our story, where we came from and where we were going. Immediately wanted to give us everything, bottled water, cookies, muesli bars. Even coffee or tea was offered to us. We stuck to a bottle of water and a cookie each.
We had enough time to do our lunch extensively. We chose a pub in the town of Shap, a little further than halfway through the trip. The only pub in the area where lunch could also be enjoyed. Upon entering, we were looked at as if alien came in. But what do you want; in such a god-forsaken village suddenly 3 of those cargo bikers, two of which are dressed very ostentatious, enter your tent. 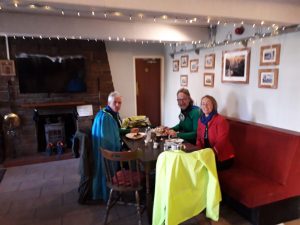 And then they also ask if batteries can be recharged…. In the end it turned out to be great people and the food was delicious. It took some time to thaw (the people I mean…).

In the afternoon it also cleared up very well, making our afternoon trip very pleasant. 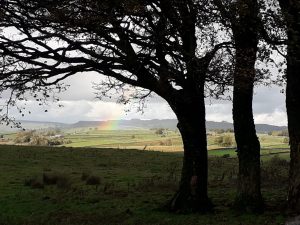 We could really use such a day, after such hardships of the past few days.

And oh yeah, did I mention I didn’t have a flat tire today?!
Greetings from Solfie,
also on behalf of Ilonka, Noel and David.