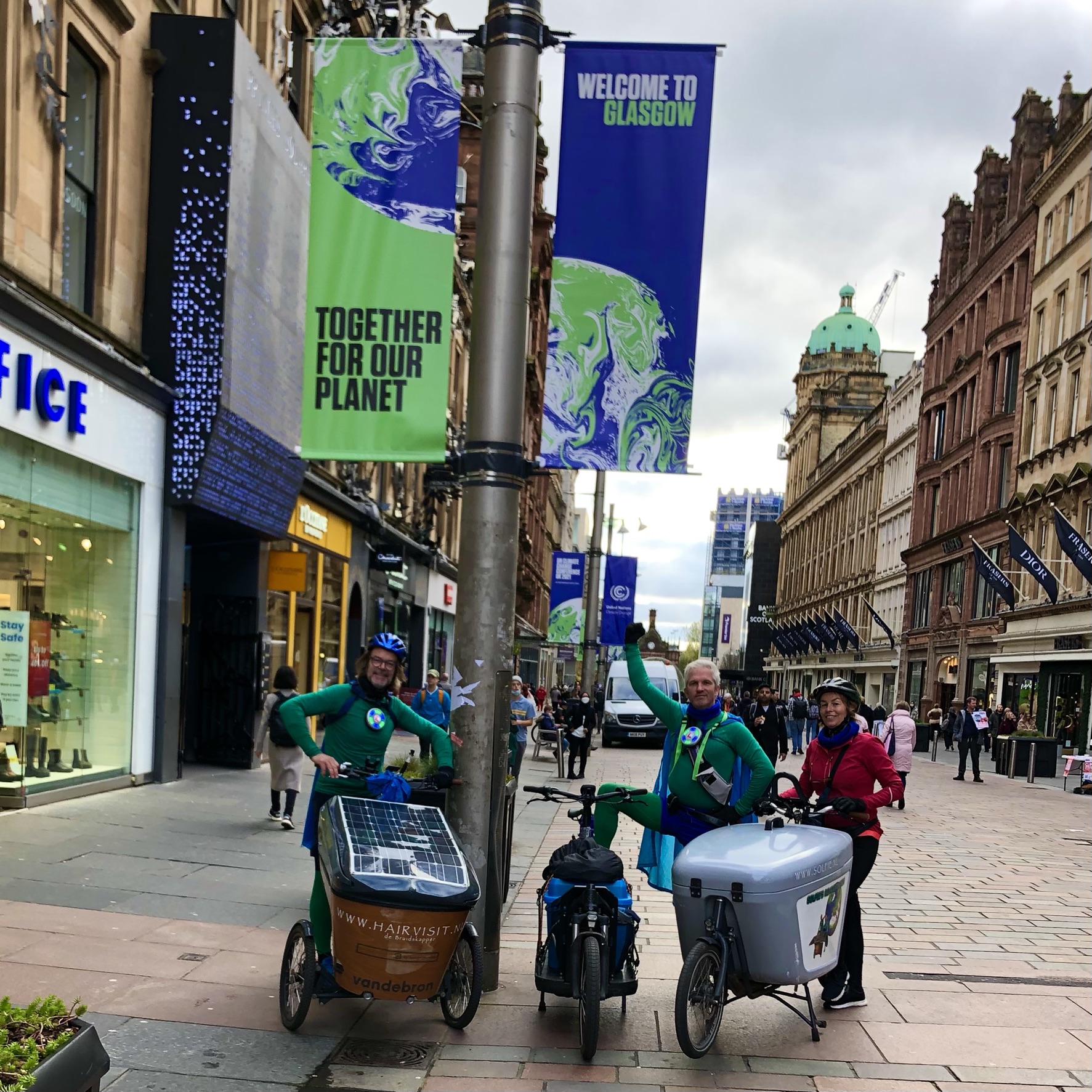 How wonderful it is to wake up in such a warm family of Karen and Tom Barbour of Climate Action Strathaven.

Their house was just on the edge of the town of Sandford. Comfortable rooms and a nice kitchen.

After the breakfast I noticed the tire I changed last night was flat again, so I had to fix that first. 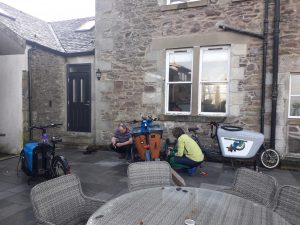 Tom had already offered to take us to Glasgow that day, but then Solfie wouldn’t come to Glasgow. And that was exactly the point of our trip “Solfie’s Road 2 Glasgow”….
That ride was 2 hours by bike (there and therefore also back). We also went to Tom’s shop in Strathaven before heading to Glasgow.

Then you have to count that it starts to get dark here at 4:30 PM and that you have to start the return journey around 2:30 PM.

The weather wasn’t bad. Slightly cloudy, occasionally sunny but of course cool. We are not complaining because we have counted on a lot of rain and wind. If you count on the worst it’ll always work out for the better! 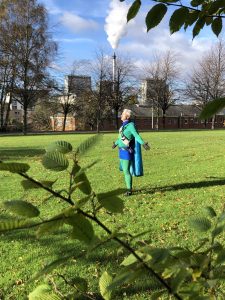 The sun got stronger and we stopped to let the solar energy do it’s work to warm us up.

It brings tension in an exciting way the closer you get to Glasgow. Advertisements everywhere that refer to the COP26 in some way.

And then you drive into town. 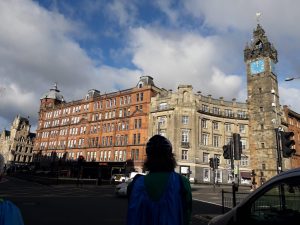 We had gotten some ideas from Tom where we could get close. A lot of security, of course, around the OVO Hydro building (next to the Scottish Event Campus, which is a bit reminiscent of the opera building in Sydney Australia) where the bobo’s of the climate conference gathered.

On the big shopping street Buchanan St we saw a coffee bar, it was time for that after that ride. We decided to take some pictures in the sun. While David was already having conversations with bystanders who naturally wondered what we were doing in that super hero outfit, I saw a camera team pass by out of the corner of my eye.

We got them to interview both of us and shoot some footage of us riding our cargo bikes with flapping capes. 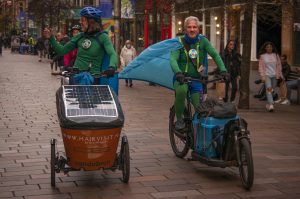 After having had that cup of coffee, we went to George Square, where several people had gathered to make a point.
David put that dot on the “i” by not only singing for a few police officers but also in general, in the middle of the square, standing on his bicycle.

Then we went to Squinty Bridge, near the conference building. There we heard from afar quite a bit of noise from protesters from Bangladesh who – as far as we could get it – demonstrated for more equality and human rights. Although deafening, the silent procession of Extinction Rebellion impressed me much more.

Dressed in red, arms and hands open, the procession passed. Goosebumps.
Further on we ran into people we’d met in a tavern before Kendal. 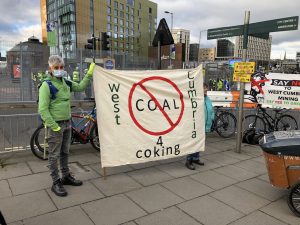 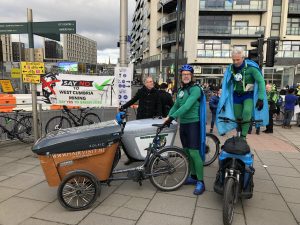 David, later on, had been caught up in a conversation with a faith fanatic filmed by a team from New York. Meanwhile time was running out but we didn’t want to leave before taking a photo on the bridge with the conference building in the background. David was still busy for a while.
When we went to the bridge to take a picture, we happened to meet two cyclists that we had already met on the way (Angela from Spain and Steven). 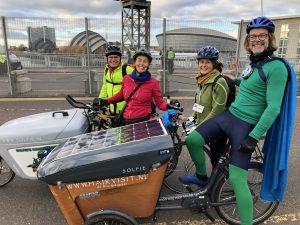 Angela was due to speak at COP26 this Friday.
Returning to the spot where David’s discussion with the fanatic was filmed, David managed to claim his stage by singing his song “Most people are mostly good” in front of the camera (which is quite long I can tell you).

We were on pins and needles (a salient pun with all the punctures recently), we wanted to get home before dark, but it was already 14:45….. That would be fast cycling.
But the faith fanatic still treated David with his own song (accompanied by music from a speaker), which was possibly even longer.

Just after 3 pm we could finally start our return journey, which took even more than two hours and so we came home partly in pitch darkness….
With mixed feelings, yes, because we really had the feeling that we were part of a special moment, a benchmark in history where perhaps the right decisions are made. In any case, you get the feeling that people understand the urgency.
It’s everyone’s turn; all of us, but especially politicians. And people have influence on that: the people we elect as representatives of the people.
Our feeling was that the UK is still quite behind. We often complain here in the Netherlands, but are really ahead in many areas, for example we belong to the top 5 happiest countries in the world…. 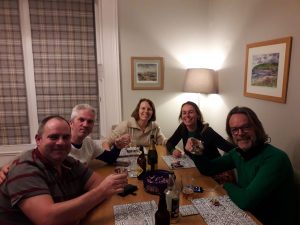 In the evening we enjoyed Karen’s cooking and chatted for a while. 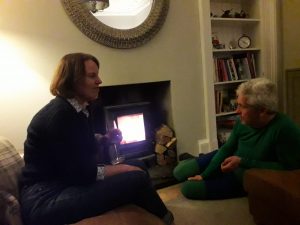