The actual start of Solfie’s Road 2 Glasgow was on October 21, 2021, in Dordrecht. David Klein, dressed in green tights, and blue cape left for Ghent (B) on his Carqon Flatbed cargo bike, made available by Babboe NL. 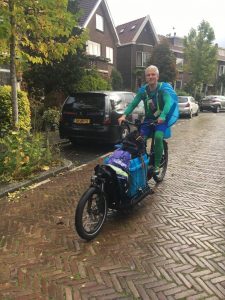 A man on a mission. A distance of 138 km (86 miles), some luggage, a blue storage chest loaded with books, ideas and props to perform his performance of  “The Sweet Spots for Sustaibable Happiness” in various UK cities.

While riding on his bike, his partner in crime Noël Wilmes and his wife Ilonka Smeets were preparing to go by sustainable transport, a Hyundai Ioniq 5,  to Dunkirk (FR) to join David. Charging the car’s battery and tying cargo bikes to the trailer. 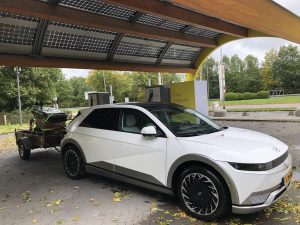 After a well deserved night of rest, David had his breakfast in Ghent. Goal today was Dunkirke, a distance of another 131 km (81 miles),  joining Noël and Ilonka and taking the Ferry to Dover. 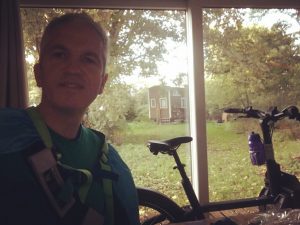 Meanwhile in Maastricht: charged bicycle and car batteries, ready to go. Looking forward to meeting David in Dunkirk and the onward journey via Ferry to Dover where “Solfie’s Road2Glasgow” continues with the three of us! Full of good courage and some excitement, also for what is to come. 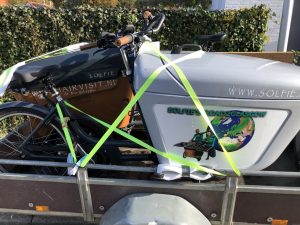 While driving towards Dunkirk with a trailer, we were shocked to discover the range of the electric Hyundai was not just affected a bit…., BIG TIME!! About half the capacity was the conclusion. Then an accumulation of new experiences, disappointments and drama began. The search for charging stations; look for a fast charging points on the map, find one, take a necessary detour and upon arrival discover that it actually is  not a fast charger…. Search further and then find a supercharger at a van der Valk Borgerhout! Full before we finished our soup. Then on again. Signals from David that the range of his bike was also less than expected and he had to stop to recharge. Also, by the time we got closer and decided to see if we could help David, the car’s battery capacity was rapidly decreasing again. So much so, that helping David also provided an extra moment of loading. Not a problem normally, if you could find a fast charging point in the area….. Not so! Then load with less capacity and patience.

While we still had to wait, Herman (our driver and tower of strength) and I made a calculation of what the percentage of charge should be if we went to pick up David’s bike where he was loading. We first had to drop off the bicycles near the Ferry in Dunkirk. In the area was a restaurant with a charging facility. Our global (and we thought even generous) calculation of the required battery percentage was disappointing but was just enough to pick up David, but it was a close call…. Relieved, we made it to the spot near the Ferry where the other two bikes had been dropped off. Glad we had just made it to the restaurant-with-loading facility, the next downer came; the charging facility was decommissioned! We also seemed to miss our Ferry if we did not take off right away, but Herman encouraged us to go for it! But the car still had only 2% battery voltage…. Too little to get to another charging station. “Go now, I’ll be fine…”…he said….What a hero! 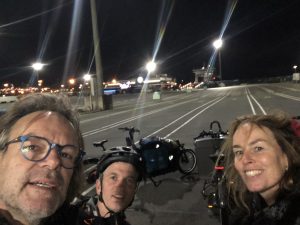 Just before arriving at the overnight Ferry (actually we had planned 6 pm…) there was one person in front of us at the only open counter. Apparently with such a problem that we couldn’t book our ticket. Goodbye Midnight Ferry! Fortunately there was another Ferry two hours later and we managed to take that one! 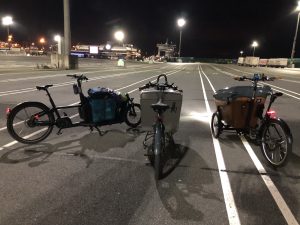 In the meantime, Herman appeared to have approached the ANWB. 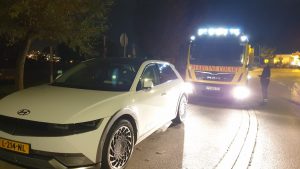 By the time they arrived, the restaurant owner also turned out to have come with a key for the loading facility at the restaurant. Could he still get enough energy for his way back? 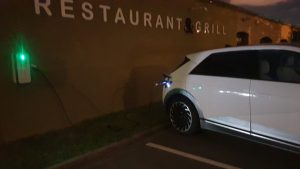 While we were on our Ferry to Dover, Herman was trying to get home with the car and empty trailer. Less weight, but still a challenge…Without a charge card…..because at an unguarded moment I had put it back in my pocket, instead of leaving it in the car. Murphy’s law…What a start to an unforgettable adventure! We will never forget this day (and night).