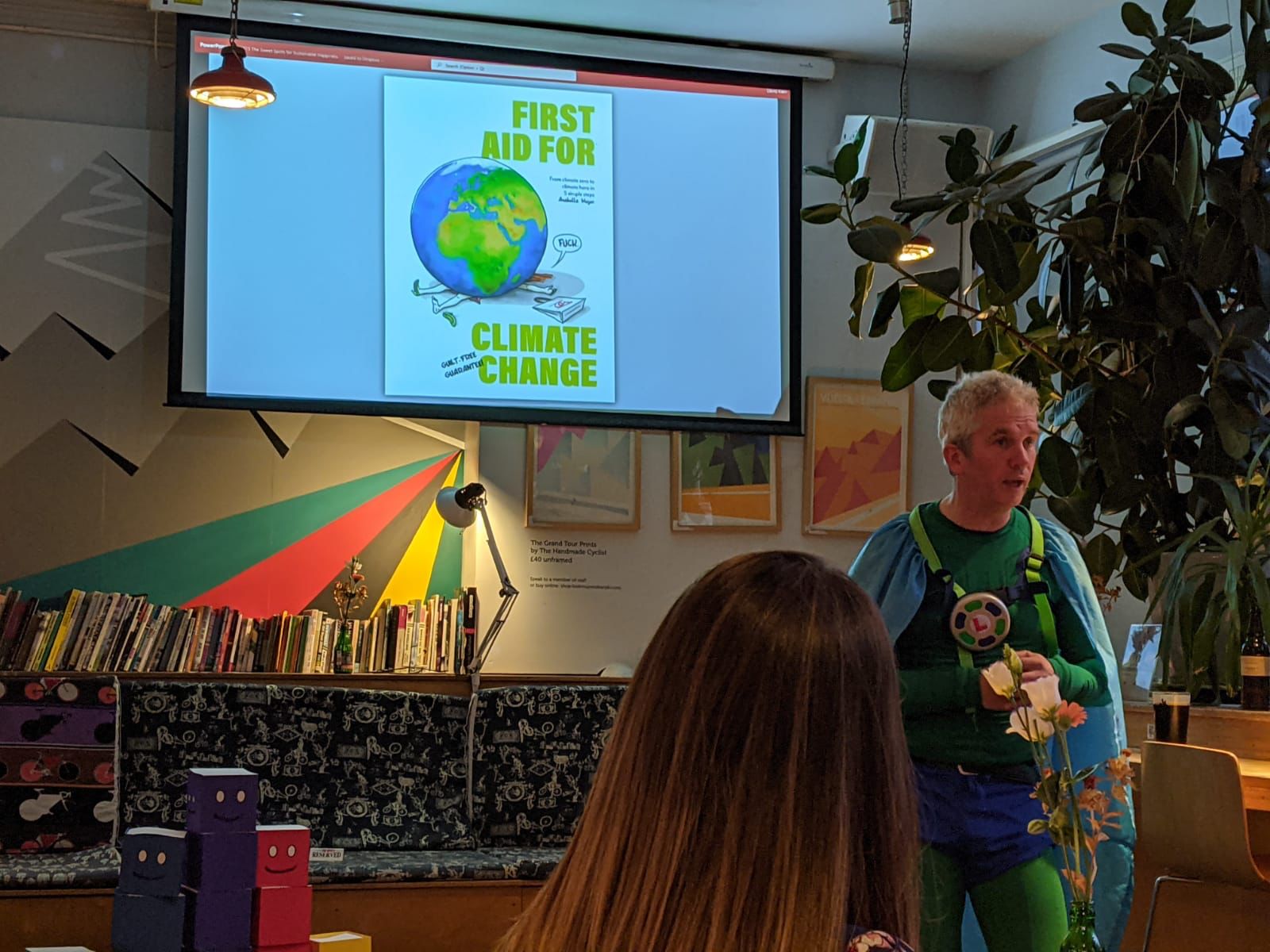 Our host in the guesthouse (Longfield) in Dover was so kind to let us in around 04:00 am and around 4:30 am we were in our beds, knowing the alarm would go of around 7:30 am to prepare for breakfast. 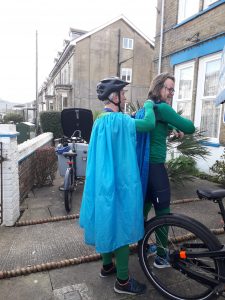 After a somewhat short night but rested, we now started the first part towards London… via Folkestone to Marden. Fantastic road along the coast! 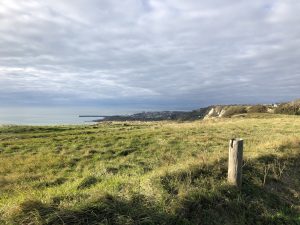 Good to clear your head from yesterday’s hardships. But in the meantime our hero Herman is still in Ostend (B) trying to recharge the car….Where would we have been without him? After we had a rather ‘challenging slope’ in the morning, where even I had to get off for a while, the afternoon was really nice. 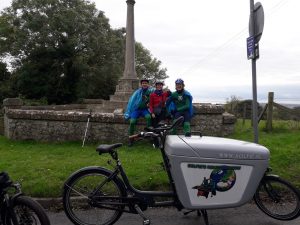 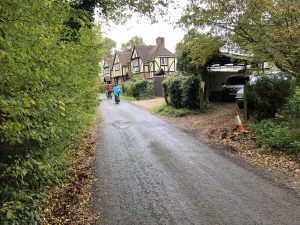 Of course, a pint of Guinness could not be missed. 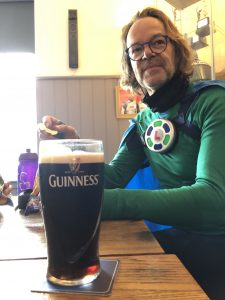 The evening sun gave such a beautiful depth to the beautiful landscape that we have a lot of it imprinted in our memory. It was, however, an excellent opportunity to shed some light on the hero outfit and capes. 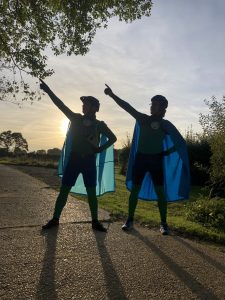 Capes, who are quite helpful in catching people’s attention and starting the conversation.
The biggest challenge is still keeping an eye on the time. Because that’s what you come across at the end of the day when you have to drive in the dark and look for your place to stay.
The learning process has begun…. 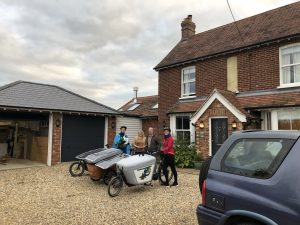 After a very nice breakfast in our guesthouse Fair View in Marden we took of to London. 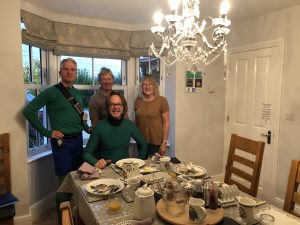 A beautiful rural route with fantastic weather. Got a lid on the nose at a euphoric moment when a steep slope on the Strava map also turned out to be unpaved. 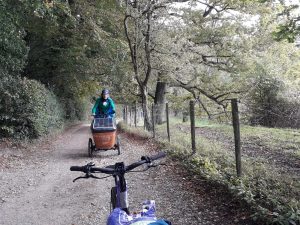 With superpowers, both Ilonka and David managed to complete the steep slope cycling. Solfie, who is somewhat overweight due to the packing, solar panels and extra battery material, could not help Noël enough and the SolarCargoBike had to be pushed on foot. 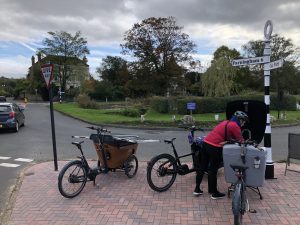 Yet satisfied when such a peak is reached again. At lunch, one fully recovers and the pride and enjoyment of the beautiful surroundings and special architectural style predominate. 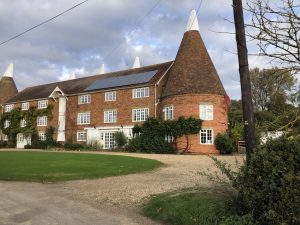 The afternoon route was as beautiful as the morning route and the weather also remained fine. As we approached London, the chance of rural driving became less and less. There was some time pressure because we both had the day 2 PCR test and David had a performance at 5 pm. 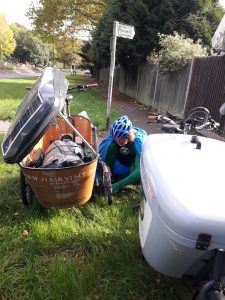 Routes to be driven along busy roads were sometimes separate sections next to the road but not maintained, so there were many bumps and a lot of rubbish on the road, including glass and thorns from shrubs…..
….you guessed it; I crashed!
David chose wisely by going on an individual ride and Ilonka helped me get Solfie back on it’s feet.
It was fixed within 20 minutes. We arrived at the test location at exactly 4 pm. 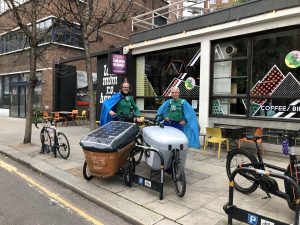 And 16:40 we were at “Look mum no hands”. Fantastic cyclist cafe. Fun people. 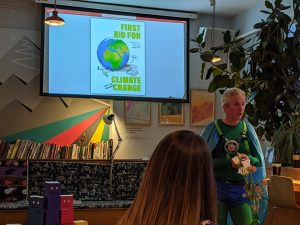 Barring some technical hiccups, the performance went pretty well for such a first time in the UK. 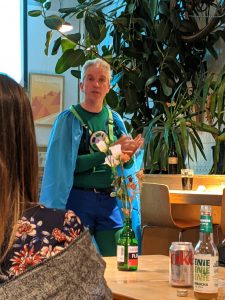 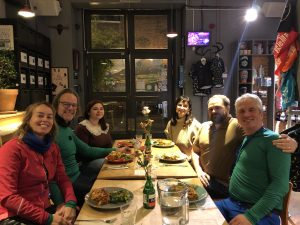 Tired but satisfied we arrived at our anti-squat place to stay, again with nice and friendly people. 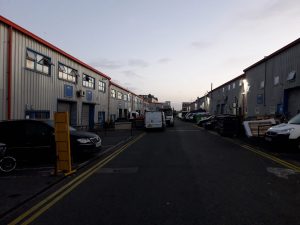 After some nice evening conversations we were very tired after this full day of appointments, challenges and excitements. It was far from a challenge to fall asleep. 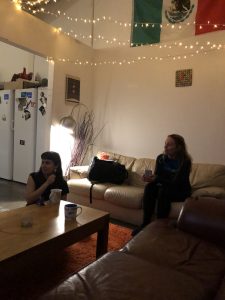