Our trip today from Peaky Blinders city of Birmingham to Newcastle-under-Lyme/Stoke was doable on paper. 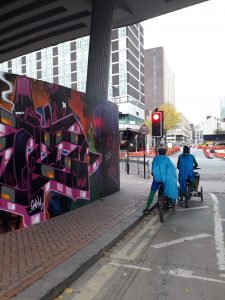 Planning had been updated and improved until 3am the night before. Mainly used info from the National Cycle Routes. Advantage: very nice routes outside the crowds and along the Birmingham canals and nature reserves.

It was really nice to see the Narrowboats, especially at an old manually operated lock.

Disadvantage National Cycle Routes: not necessarily intended to go from A to B, but often in a kind of round. In the end, therefore, although very nice pieces, but actually more KM than was necessary.
And then you are also treated to a very annoying phenomenon in England: A-frames! 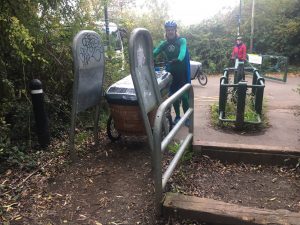 Intended to keep motorbikes out of these routes intended for cyclists and pedestrians. Unfortunately, these are so narrow that not only my tricycle ‘Solfie’ but also David’s (especially due to the width of the handlebars) did not fit through. 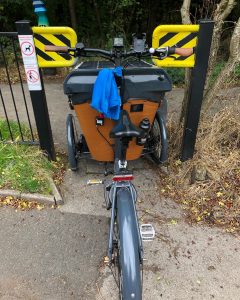 In our view, installing these types of blockades has to do with the distrust of citizens. Our solution would be to simply put up a sign saying “No motorcycles” and trust that “the people are good”. That is also the title of one of the other books that serve as inspiration for our journey. Written by Rutger Bregman and in English under the title (Human Kind). “Most people are mostly good.” 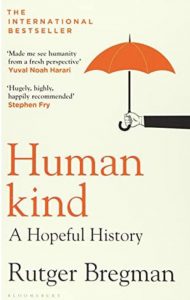 With that in mind, the cycling-friendliness of England would improve in one fell swoop Boris… Get those nonsense away!
This ultimately resulted in so much loss of time that we were in danger of not making our appointment to check in before 6:00 pm. Finally, one of us managed to break away from the group and start a final sprint to be at the address designated by Google maps at 6:55 PM.
That turned out not to be the real address, but a street name with a zip code. Google maps will then take you to a place where that zip code starts (or exactly in the middle, I haven’t researched that yet). After calling the receptionist she reassured me that she would help me and not be gone at exactly 6 pm. It also took some effort to get Ilonka and David in that place, but in the end, with more frustration than desired, we were able to move into our rooms.
Tonight there was no performance scheduled, but again tomorrow, in Manchester.